From Vaudreuil-Soulanges to Time Square

Alexy Préfontaine has something to be proud of. His works now include the exhibition of one of his works on a building in Time Square in New York.

The artist known under the pseudonym Aeforia discovered digital art a few years ago. In fact, he took his first steps in 2014 after downloading an app on his cell phone, allowing him to make montages from his own photos. However, it was in 2017 that three-dimensional media became his main means of artistic expression.

If you would like to exhibit in Time Square. It is possible, but it takes several thousand dollars for the cost of renting a screen. For the Vaudreuil-Soulanges native, it was rather an invitation that was made to him. “I was contacted by NFT Magazine to participate in the exhibition, says Alexy Préfontaine. The magazine rented a screen for one hour. During this time, 60 works were displayed including mine.”

Alexy Préfontaine admits that he found it special to see his creation. “I had booked a ticket to see an exhibition, he says. I realized that my work was displayed on the screen at the same time. So, I waited. It was quick. But the few seconds that I got to see it, it seemed surreal.” 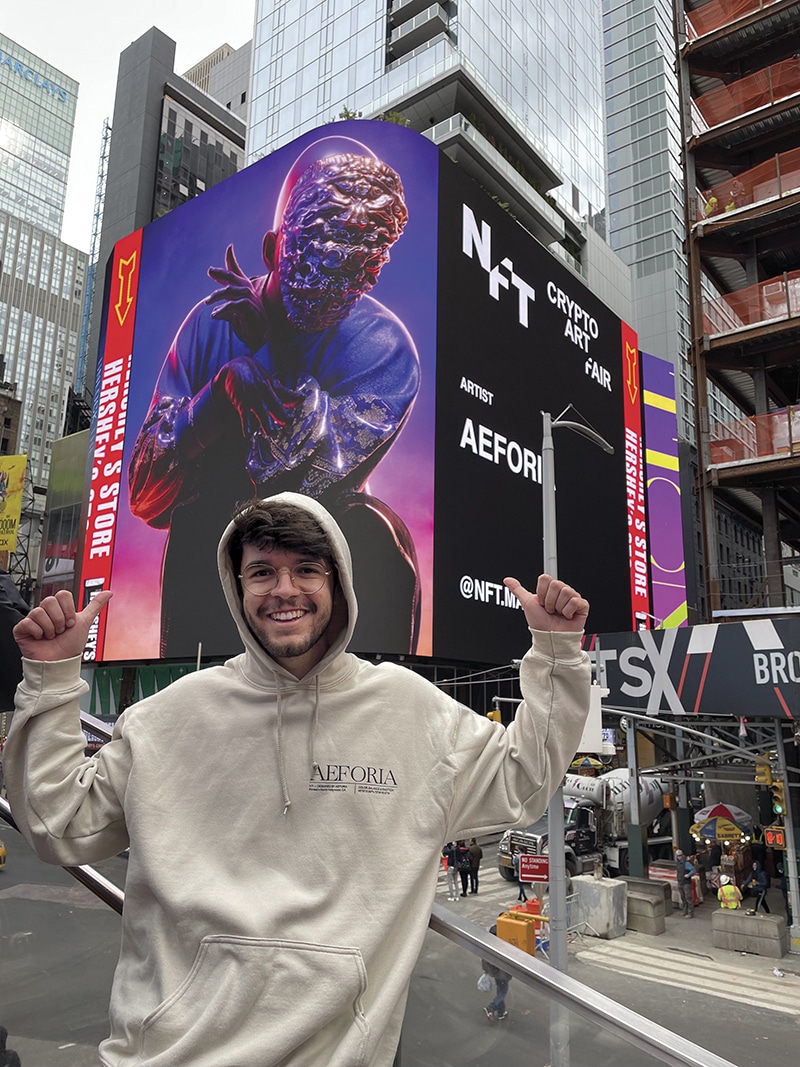 The work of Alexy Préfontaine which was presented on a screen in Time Square. (Photo ABANA)

To create, Alexy Préfontaine uses several software. In fact, some works may require up to 8 software. “I experimented a lot before I finally learned how it worked. I have listened to several tutorials and gained experience over time.”

The time to create a work varies greatly. The former student of École Secondaire Cité-des-Jeunes explains that a creation can take from a few days to several months.

“In my case, I continuously work on two or three projects at the same time. I have the chance to make a living from my art. I sometimes work for advertising agencies and sometimes on my creations. I am quite busy.”

Like most artists, gaining notoriety doesn’t happen overnight. Alexy Préfontaine is no exception. “I’ve been developing my presence on social networks for several years. The more an artist develops his reputation, the more there is an audience. In 2020, I adopted NFT (non-fungible token) technology. It is a kind of certificate of authenticity that allows to prove the origin of a digital good, such as a work, an image, a video, an audio file, to which is attached a digital identity.”

NFT technology has dramatically changed the world of digital works. “Thanks to this, it makes it possible to sell works like you do with traditional art. Without NFT, it’s difficult to give a digital work a rarity. It’s a little-known world, but there are works that can sell for millions of dollars. Usually, buyers are familiar with cryptocurrency. However, people who come from the traditional art collector market are starting to make their way into digital art.”

Like most artists, Alexy Préfontaine does not know what his future will consist of. But his head is already full of projects. Obviously, he dreams of a solo exhibition in a gallery or, in his wildest dreams, a solo exhibition of his works in Times Square.

What is already confirmed is that I will be presenting a series on the Nifty Gateway website. So, people will be able to see my new creations in the coming weeks.

A second mural for Sophie Wilkins and Anik Favreau