We end our tour of elected officials in the provincial riding of Huntingdon where Claire IsaBelle has been the MP since 2018. It was about her rather particular professional and political journey and the challenges of a large riding like the one she represents. 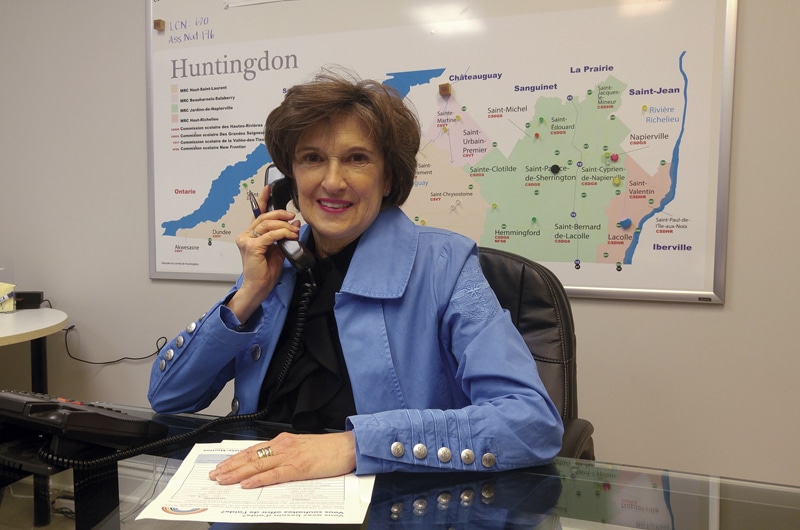 (Photo Office of the Member for Huntingdon)

Mrs. IsaBelle is one of the first people to approach the Coalition Avenir Québec (CAQ) when it was created in 2011. She was particularly attracted by the new life that Mr. Legault brought with his education platform. Being a professor at the University of Ottawa in education since 2004, she knows the issues in her field.

“Seeing a party put education at the center of their agenda was very appealing to me, says Mrs. IsaBelle. We can still see it today with four-year-old kindergartens and the investment in childcare centers.”

Claire IsaBelle therefore embarked on the political adventure in the 2012 election with no apprehension. She appreciates the experience, but is defeated by the then MP.
Having gathered a solid base of 6,000 voters in 2012, she tried her luck again in 2014. She failed to get elected. However, she did not give up her political commitment and following the death of her father who occupied much of her time, she joined the political commission of the CAQ for 4 years.

In 2018, she was approached to be a candidate, but new director of the faculty of education at the University of Ottawa, she refused in the first place. At the same time, she is launching a book on the education of Franco-Ontarians. Having some expertise in Francophone education, she changes her mind to put forward the ways of Franco-Ontarians in Quebec.

“I don’t believe that everything written in this book is applicable in Quebec, says Mrs. IsaBelle. Franco-Ontarians are in a minority situation in their province and do not have the same tools. There are, however, many ways of doing things that can be transposed to Quebec and that is what prompted me to come back for a third time in an election.”

After two elections, she began to be fairly well known and with her time with the CAQ, she entered parliament in 2018.

The challenges of a large constituency

Of the ridings that VIVA MÉDIA visited, that of the member for Huntingdon is the largest in surface. From Sainte-Barbe to Lacolle, passing by Saint-Michel, the district covers more than 2 339.67 km2 . It poses challenges of travel and contact with voters that MP IsaBelle explains to us.

Being rural, Huntingdon County has a lot of farmers in its territory. Coming from a market gardening family, Mrs. IsaBelle understands their reality well and easily comes into contact with them.

“This is one of the biggest challenges, she says. Many voters are affected by issues that are completely unknown to people living in cities. For example, we lose over 2% of our soil each year due to wind erosion.”

To solve this problem, she wants to create a research center to counter erosion and innovate. Her region is one of Quebec’s pantries. She explains that 40% of the fruits and vegetables grown in Quebec come from there. Hence the importance for her to have a research center.
She also makes extensive use of regional organizations to reach out to people. As citizens live far from each other, she uses these moments of meeting to listen to the population.

The member is very proud of what she accomplished during her term. She does not hide that the pandemic has stopped a large number of projects in her constituency. In addition to providing immediate help to people during the pandemic, she managed to set up three new childcare centers, including the one in Saint-Chrysostome, which had been under construction since 2012.

“We are proud to put education forward by starting with CPEs where young people can develop and start their educational path”, says Claire IsaBelle.

She is also very proud of the investment in roads in her county. In fact, many of the roads were in very poor condition. With the help of the Ministère des Transports du Québec (MTQ) and the municipalities concerned, she was able to rehabilitate the roads in the region.

“I do not know yet if I represent myself in 2022, it is too early, mentions the deputy. I love being a teacher, I still have 3 doctoral students that I am closely following. However, I find that I still have so much to accomplish for my region.”