From October 13th  until November 14th , the travelling immersive artwork “Iceberg” is in residence in the Vaudreuil-Soulanges region. After Montreal, Toronto and New York, this Quebec creation stops at Parc des Mésanges in Notre-Dame-de-l’Île-Perrot. 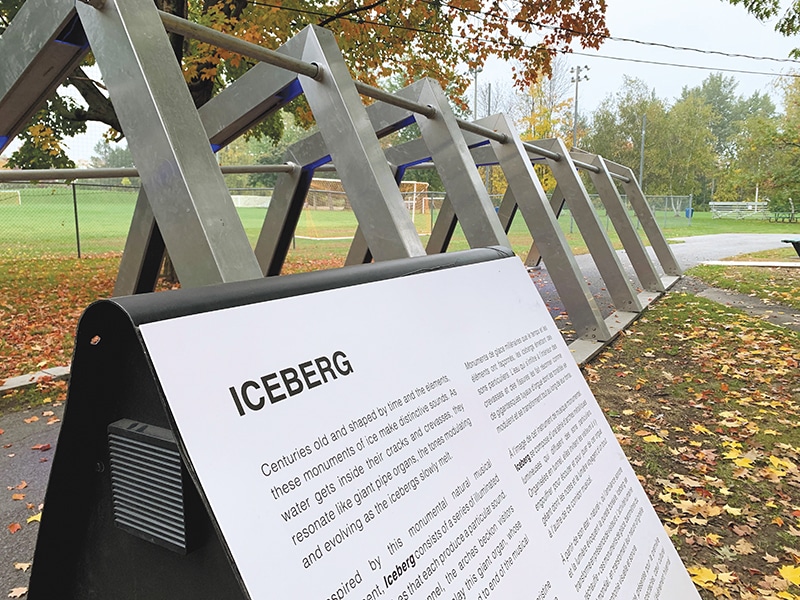 “We are very happy to make this work accessible to residents of NDÎP and neighbouring towns,” says Danie Deschênes, Mayor of Notre-Dame-de-l’Île-Perrot. “More accustomed to setups in an urban environment, Iceberg will be magnificent in the wooded landscape of Parc des Mésanges”, she adds.

The artwork presents the journey of an iceberg, from its descent in polar waters to its dissolution near the southern coast. Composed of a series of luminous metal arches that form a tunnel and diffuse special sounds, “Iceberg” invites people to rush in to listen to and play this giant organ. The immersive work is transformed into the presence of visitors as the notes and light produced travel from one end of this musical corridor to the other.

A true visual and sound symphony, “Iceberg” is accessible every day from 9 am to 9 pm. The health measures applicable to outdoor activities remain in effect. Wearing a face cover is not compulsory but recommended, as is respecting physical distancing.

“Iceberg” is a creation and realization of Félix Dagenais and Louis-Xavier Gagnon-Lebrun, in collaboration with “APPAREIL Architecture”, Jean-Sébastien Côté and Philippe Jean. It is a production of ATOMIC3 and the Partenariat du Quartier des Spectacles.

From Vaudreuil-Soulanges to Time Square