Every year on March 8th , International Women’s Day is acknowledged around the world. It is a time to celebrate the important contributions of women and girls everywhere; to recognize women who inspire us all; and to renew discussion about the importance of gender equality in Canada and around the world. The 2nd  Annual International Women’s Day celebration organized by the Montéregie West Community Network was held online on Saturday, March 6th  to acknowledge the women of influence in our community and to celebrate their contributions. Almost 135 women from all across the area and beyond came together on Zoom for some inspiring talks, uplifting live music, a fun laughter yoga session, collaborative interactive activity and to give away lots of door prizes graciously donated by local businesses and individuals.

The event got underway with Lindsay Alexander, a local Chateauguay songstress, singing “Man, I Feel Like a Woman” by Shania Twain to get everyone in the mood. Women of all ages moved to the beat behind their computer screens getting their groove on.

Attendees were treated to heartfelt and inspiring talks given by two different women from the Chateauguay community. Elyssa Gold-Cipriani, entrepreneur and owner of the 30-Minute Hit women’s gym and the newly-opened FORCE Nutrition juice bar spoke about her difficult upbringing, body image issues, low self-worth, anxiety, fertility issues and the challenges of being a business owner during the past year. She explained that starting both businesses was scary, exhausting and anxiety inducing but that she has found great fulfillment in following her passion and saying “YES” to opportunities. She said, “not every day will be great, but we deserve greatness in our lives and we need to say ‘yes’ more often to get that”. She disclosed that even now she still has days where she is not ok and struggles with body image issues and anxiety but that she continues to say ‘yes’ to new opportunities such as the offer to speak at this women’s day event. She concluded saying, “If I waited until I was ready or comfortable to say ‘yes’, I would still be stuck in a life that I didn’t love, with an emptiness I couldn’t fill.”

Gail Cooney, owner of Chateauguay printing company Ressources Illimitées, followed up by speaking about growing up never feeling good enough or successful. She discussed the difficulties she faced throughout her life and described how it was those same challenges that forced her to make her dreams a reality. She built her printing business from the ground up after losing her job and kept it going despite numerous challenges both personal and professional. A particularly poignant moment came when Cooney had difficulty speaking about the death of her sister who was also her business partner. Her inability to discuss this painful moment was one that seemed to resonate with many of the participants as they shouted words of encouragement telling her, “You can do it Gail! We love you!” Once she was able to continue, she stated that opportunity is everywhere. She said, “The most important thing is that you have to believe in yourself, because if you don’t, how can you possibly expect someone else to?” She shared her tips for getting through life and achieving success emphasizing that how one defines success will be different for everyone. To her success is about achieving her “personal excellence and seeing how far I can go. Success is whatever you want it to be.” Her final words of wisdom concerned getting through the obstacles in life that we will all inevitably face. She asserted, “You can’t change what happens to you, but what you CAN do is change how you deal with the stuff that is thrown at you – change how you react to it. The only thing you can control is yourself.”

The ironic thing was that when these two women, who were not professional public speakers, made themselves vulnerable by talking about painful moments in their lives in an effort to uplift and inspire other women, it was the community of women who gathered that day to listen that reached out to support them.

Sandwiched between the two speakers was Christopher Simeone who led the attendees in an interactive presentation on laughter yoga and the health benefits of having a good chuckle followed by an interactive activity that gave participants an opportunity to honor and memorialize the important women in their lives who have shaped who they are.

The event wrapped up with another song from Lindsay who sang, “Rise Up” by Andra Day, sending the participants off with a renewed energy and vigour to face their own challenges knowing that with such a supportive community behind them they are never alone in their struggles.

MWCN’s mandate is to support the English-speaking community through inspiring events such as this. If you missed it, a recording of the event will be available on our Facebook page and on our website at www.mwcn.ca. 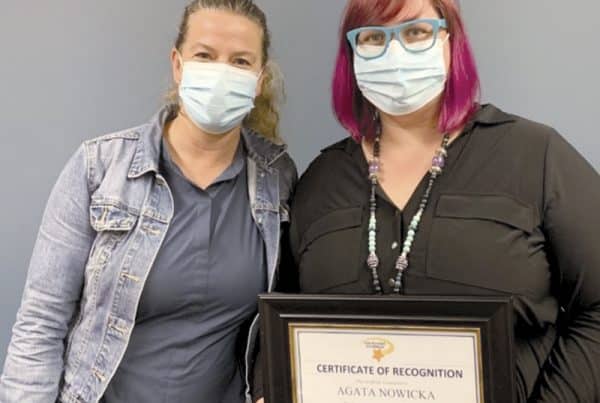